A Wisconsin sauce manufacturer experienced some serious cleaning issues with their CIP system. The system wasn’t some old, broken down, dilapidated, poorly constructed system. In fact, it was fairly new, of about the 2006 vintage. But, because of production upgrades and enhancements, the system wasn't "cutting the sauce" anymore.

The system functioned properly, in theory, but producing at a higher capacity than originally designed had caused the production lines to simply outgrow the CIP system. The production lines were larger and contained bigger equipment that needed cleaning. For the CIP system, these adjustments meant lower flow rates and lower pressure, causing insufficient cleaning and sanitation of tanks, valves, lines, and other equipment. Unfortunately, parts of the process had to be cleaned manually, taking what was supposed to be an automated process to a time consuming, manual one.

The CIP system was carefully analyzed to see if any parts or equipment could find a home in the new system, but it was determined that too many adjustments and changes would have to be made, making this option more cost prohibitive than starting over with something new. 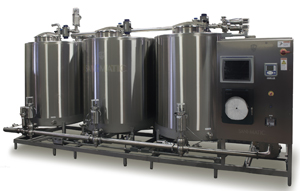 So, a new system was designed, but this time, engineers were sure to plan for increased production in years ahead. A new, 3-tank system was designed with a heat exchanger, pump, angle line discharge strainer, instrumentation, controls, etc. Now they had everything they needed to reap the benefits of enhanced performance and efficient cleaning for the upgraded production lines.

The new CIP system exceeded the manufacturer’s expectations and they immediately recognized improvement after it was installed. The water temperature climbed faster, chemicals mixed faster, and it cleaned faster too, saving time and the labor of manual cleanings.

If you’ve noticed a change in your CIP system’s performance, it may be time to reassess its requirements and capabilities. Talk to an experienced engineer to discuss your options, and don’t forget to plan for growth!