At an upper midwest dairy processing plant, an intake bay area where milk trucks are unloaded showed signs of concrete erosion and aggregate exposure due to years of contact with chemicals, like chlorinated cleaner, acids, bases, and even CIP system cleaners.

The concrete curbing was crumbling, aggregate was showing, what else could go wrong? Well, the intake bay area itself was eight bays wide, which presented an interesting challenge. How would they address the corroded concrete curbing and exposed aggregate in all eight bays while keeping their operations going – after all, milk production does not stop!

Areas of corroded concrete curbing and exposed aggregate trapped harmful bacteria and water within the intake bay areas. Upon inspection, the FDA urged the dairy processing plant to take action and fix the eroded concrete curbing and exposed aggregate to prevent harmful bacteria from finding its way into the milk supply. Safety was also a concern here because the uneven surfaces created trip hazards for workers.

The dairy's plant management team called in the Crane Engineering Corrosion Resistance team to make concrete repairs and restore the bays to an acceptable level. In order to continue operating with limited interruption, the decision was made to shut down two bays at a time. 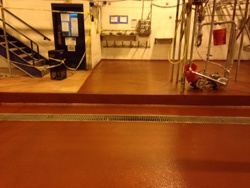 To begin, the Crane Engineering coating team prepared the concrete floor and curbing in four phases over a ten day period by diamond grinding and shot blasting the surface to promote adhesion and bond strength of the epoxy coating. It's important to remember that proper surface preparation should not be overlooked, otherwise you run a risk of premature failure of the new epoxy coating.

The next step was vital to preventing future chemical attack in the bays. A chemical resistant epoxy grout was poured to form a one foot high curb approximately 1½ inches thick to the area. By rebuilding the curb and eliminating the exposed aggregate, the area became smooth once again and the pooling and puddling of harmful bacteria and water was eliminated. For improved safety, a chemical resistant epoxy resurfacer was applied to the concrete with a non-skid aggregate. To close the loop, a fast-cure sealer was applied, which allows for water exposure in as little as eight hours. This ensured the bays would be ready to be put back into operation within only a short period of time.

Now, the dairy's plant management team can rest easy knowing their intake bay areas were properly restored, so water and bacteria will no longer pool in the bays. It's also a safe bet that chemical attack and concrete erosion are a thing of the past.